The state of our blog is strong. Family Inequality readership grew 20% in 2015. That continues a pattern of slowing annual growth:

But it’s a good result compared with our old-new-media benchmarks, Facebook and Twitter, which had annual year-to-year growth rates of 17% and 11% through the 3rd quarter (slower in North America). So progress is good, media-empire-wise.

According to Twitter’s analytics, @familyunequal followers skew a little female (52%), college-educated (54%), high-income (half over $75,000), professional, and single (55%). In terms of interests, they are most into politics, news, and books — much more than the Twitter average. In consumer style, Twitter says they’re into (in descending order): premium brands, ethnic explorers, natural living, fresh and healthy, vegetarian, Mexican food, and Kosher (the last one at twice the Twitter average).

Come to think of it, instead of passively penalizing me for my social media work, my university should probably fine me for not monetizing this audience better (I pay WordPress to have no ads on the blog).

In related publishing news, my textbook is being used to teach thousands of undergraduate students at more than 100 colleges (some of their instructors share ideas and resources on a Facebook group). And I’m happy to report that I have a contract with the University of California Press to produce a collection of revised and edited essays from the blog, to be published in 2016.

12. Herculean dimorphism. Thanks in part to a hefty repost on Sociological Images, this turned out to be one of the most popular in my series on sex dimorphism in popular culture.

8. New data on gender-segregated sociology. Our discipline is internally gender segregated, and also increasingly female-dominated professionally (but not yet overwhelmingly so, as I showed in a followup post).

7, 9. How random error and dirty data made Regnerus even wronger than we thought. With the Supreme Court’s Windsor decision (teaching supplement here), the pressing importance of this research dispute subsided, but it’s still going on. This year we learned that the Regenerus/Wilcox research was worse than we even knew, and also that the anti-gay-parenting community is still trying to make a peer-reviewed paper trail for future use (post number 9).

6. How about we stop moralizing and end child poverty tomorrow? The simple observation, supported by a few calculations, that the U.S. has plenty of money to lift every poor child out of poverty if we wanted to.

5. No, you should get married in your late 40s (just kidding). A little debunking of the latest bit of you-better-marry-early advice, based on age at marriage and divorce risk. A classic example of overreaching to turn minor research blips into breaking news personal-life advice.

4, 10, 11. On the ropes (Goffman review). Everything Alice Goffman was big in U.S. sociology this year, producing three of the top 11 posts: my review of her book, reporting that my comment was rejected by the American Sociological Review, and my proposed a rule change for the American Sociological Association’s dissertation award (to require the winner to make their dissertation publicly available), which is on its way to approval, I hope.

3. Our broken peer-review system, in one saga. A blow-by-blow report on how Lucia Lykke and I tried – eventually successfully – to publish a paper on attitudes toward pornography.

1. How we really can study divorce using just five questions and a giant sample. This post was aided by a big day on Reddit’s Data Is Beautiful page, because of the heat-map graphics showing divorce risk by age at marriage and marital duration. (Also a warning to look at marital history of both partners, which little research in this area does – because more than 1/3 of women marrying for the first time over age 35 have husbands who’ve been married before.) 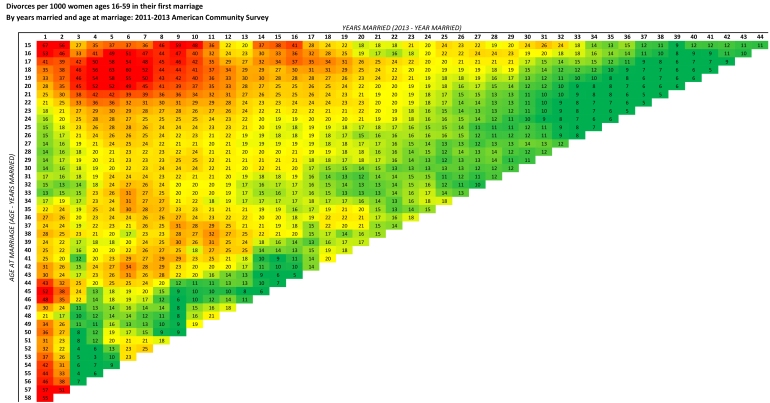