I had a popular post in 2013 called, “Why taller-wife couples are so rare,” a title given it by my old Atlantic editor, who ran it under a picture of Nicole Kidman (5′ 11″) with her second shorter husband. I also put a version of it in my book Enduring Bonds, and reference it in The Family. In it I used data from the 2009 PSID to show that people are more likely to pair up as taller-man-shorter-woman than would be expected by chance. I’ve now updated it with the 2017 PSID data. This is a revised version of that post with the new data.

Men are bigger and stronger than women. That generalization, although true, doesn’t adequately describe how sex affects our modern lives. In the first place, men’s and women’s size and strength are distributions. Strong women are stronger than weak men, so sex doesn’t tell you all you need to know. Otherwise, as retired colonel Martha McSally put it with regard to the ban on women in combat positions, “Pee Wee Herman is OK to be in combat but Serena and Venus Williams are not going to meet the standard.”

Second, how we handle that average difference is a matter of social construction: We can ignore it, minimize it, or exaggerate it. In the realm of love and marriage, we so far have chosen exaggeration.

Consider height. The height difference between men and women in the U.S. is about 6 inches on average. But Michael J. Fox, at five feet, five inches, is shorter than almost half of all U.S. women today. On the other hand, at five-foot-ten, Michelle Obama is taller than half of American men. So how do people match up romantically, and why does it matter?

Because everyone knows men are taller on average, straight couples in which the man is shorter raise a problem of gender performance. That is, the man might not be seen as a real man, the woman as a real woman, if they don’t (together) display the normal pattern. To prevent this embarrassment, some couples in which the wife is taller might choose to be photographed with the man standing on a step behind the woman, or they might have their wedding celebrated with a commemorative stamp showing her practically on her knees—as the British royals did with Charles and Diana, who were both the same height.

They were the same height pic.twitter.com/I9YVAcU4hn

But the safer bet is just to match up according to the height norm. A study from Britain measured the height of the parents of about 19,000 babies born in 2000. They found that the woman was taller in 4.1 percent of cases. Then they compared the couples in the data to the pattern found if you scrambled up those same men and women and matched them together at random. In that random set, the woman was taller in 6.5 percent of cases. That means couples are more often man-taller, woman-shorter than would be expected by chance. Is that a big difference? I can explain.

For illustration, and to compare the pattern with the U.S., I used the 2017 Panel Study of Income Dynamics, a U.S. survey that includes height reported for 4,666 married couples. These are the height distributions for those spouses, showing a median difference of 6 inches.

Clearly, if these people married (and didn’t divorce) at random we would expect the husband to be taller most of the time. And that is what we find. Here is the distribution of height differences from those same couples: 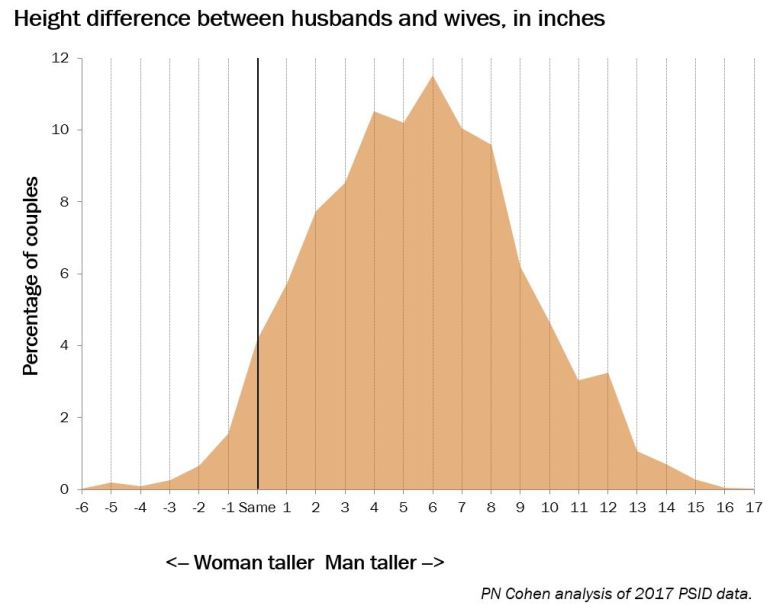 The most common arrangement is the husband six inches taller, and a small minority of couples—2.7 percent—are on the left side of the line, indicating a taller wife.

But does that mean people are seeking out taller-husband-shorter-wife pairings? To answer that, we compare the actual distribution with a randomized outcome. I made 10 copies of all the men and women in the data, scrambled them up, and paired them at random. They I superimposed the two distributions — observed and random — which allows us to see which arrangements are more or less common in the actual pairings than we would expect by chance:

Now we can see that from same-height up to man-8-inches-taller, there are more couples than we would expect by chance. And below same-height—where the wife is taller—we see fewer in the population than we would expect by chance. There also are relatively few couples at the man-much-taller end of the spectrum—at 9 inches or greater—where the difference apparently becomes awkward, a pattern also seen in the British study. In the random distribution, we would expect 10 percent of couples to have a taller wife, but we only see 7 percent in that range in the observed data.

You could look at this as people marrying to conform more closely to a norm of husbands being 6 inches taller, because there is reduction in both tails. But that left tail just happens to be pulled down right after you get to taller wives, so you could also call it a taller-man norm.

Humans could couple up differently, if they wanted to. If it were desirable to have a taller-woman-shorter-man relationship, it could be much more common. In this sample, 27 percent of women could marry a shorter man, if they all insisted on it. Instead, people seem to exaggerate the difference by seeking out taller-man-shorter-woman pairings for marriage (or maybe the odd taller-woman couples are more likely to divorce, which would produce the same result).

What difference does it make? When people—and here I’m thinking especially of children—see men and women together, they form impressions about their relative sizes (and related capacities). Because people’s current matching process reduces the number of woman-taller pairings, our thinking is skewed that much more toward assuming men are bigger.

I put the Stata code for this analysis up here.

Thanks to Sebastian Karcher, who figured out for me that 34 percent of women could marry a shorter man.

Special thanks to Jeff Spies, who talked me down on Twitter the other night when I thought the results were all different, and then went and got the data and showed me that I was wrong, which led me to fix it, in the process restoring my faith in the resilience of patriarchy.