On the one hand, on the other hand.

I make graphs to help me understand trends and patterns, not just to present what I’ve already decided is the story. Sometimes, though, I make some graphs then set the work aside and forget I did it. In this case, I came back to the subject and redid the work from scratch, and came up with a different story. I’ve harmonized the graph design to dramatize…

On the one hand: Despite some ups and downs over the last century and a half, marriage remains nearly universal in the U.S.

On the other hand: Since the glory days of mid-century, marriage has been in free fall: 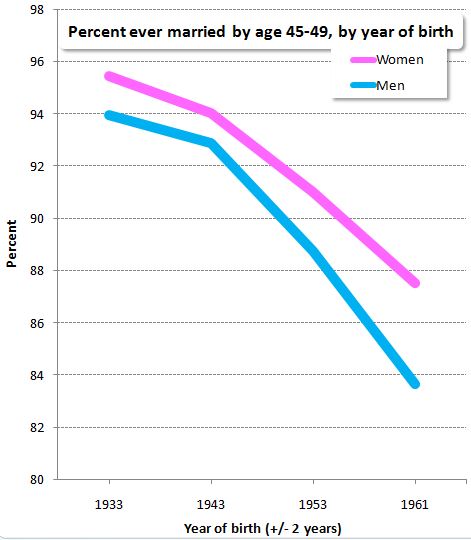 Both graphs arrange people by year of birth, and show the percentage of people in the age group 45-49 who are married, separated, divorced or widowed, according to the Decennial Censuses and the 2008 American Community Survey, with data from IPUMS (add 47 to the birth year to get the data year).

Two things to always watch out for in American family trends: the period included on the x-axis — beware trends starting in the 1950s. And the scale on the y-axis. (Though I don’t subscribe to the view that zero always needs to be on the y-axis, as long as it’s clearly labeled.) A smaller point is that vertical layout highlights the change, while the horizontal layout reduces the angle of the slopes.